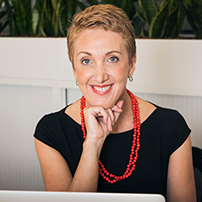 Founder & CEO, The Art of Agency

Megan Gilmour is a social innovator, global changemaker, tech entrepreneur and champion for human-centred solutions to complex social problems.
In 2010, after a 25-year career in government, publishing, and international aid and development, Megan’s path took an abrupt turn when her son was diagnosed with a life-threatening illness.
Given her extensive experience in addressing system-wide change and global social issues, she thought she was prepared for what lay ahead, but living in the hospital system as a parent proved to be a confronting and disempowering experience.
Megan quickly saw that creating real social impact required human connection over bureaucracy, programs and dollars. In 2012, with her son in recovery, she completed her Masters Degree and resolved to tackle one of the glaring inequities her son faced over the two years he fought his illness– isolation due to time away from school. She co-founded Missing School, a now internationally-acclaimed not-for-profit.
Following that, she authored publications on matters of Australian national interest and co-authored an Australian-first report on school connection for sick kids. The report received a Prime Minister’s statement of support in 2015 and generated over 160 media articles. This then led to Megan instigating the first Australian government report on the issue and guiding its governance methodology. When government asked “what’s the solution?”, she set her mind to designing a world-first education innovation that connects seriously-ill students to their classrooms through telepresence robots.
The seeds for Megan’s unique ability to implement human-centred solutions to system-wide problems were planted at an early age.
A fiery redhead with a rebellious spirit, Megan was born and raised in Sydney’s multicultural heartland. With daily exposure to different cultures, ideas and influences, she forged a strong sense of social justice that lead her to leave school at 15, attend business school and begin a career in government that saw her rise through the ranks to become the NSW Finance Minister’s youngest staff member.
Within just a few years Megan was working at an international development consultancy, and in later work spearheading multi-million dollar initiatives to address complex social and development issues across 24 countries.
Megan now teaches and mentors changemakers to build enterprises for social good, and has co-founded tech startups in the global development and the assistive robot sector. In addition, after the success of Missing School’s pilot program, she is now advocating for telepresence robots to be rolled out in classrooms across Australia and globally.
Megan is a Churchill Fellow (with studies in six countries for connecting seriously sick kids to their education), a keynote and TEDx Speaker, an expert on raising funding for large and dynamic innovation projects, a Member of the ACT Disability Education Reference Group (DERG), and the Health, Educators, Learner, Parents Alliance national committee. Megan was nominated as a finalist for the 2019 ACT Australian of the Year award, and the Telstra Business Women’s Awards.
As a keynote speaker and media spokesperson, Megan’s inspirational and unconventional journey is powerfully motivating. Her big picture perspective and ability to cause lasting social change at scale through the power of human connection and innovation uniquely places her to shift audiences beyond passive observers to active changemakers.