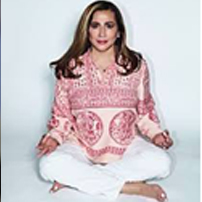 Social Entrepreneurship: The Giving Back Foundation

Gandhi is the founder and CEO of The Giving Back Foundation, a foundation geared towards alleviating illness, poverty and suffering while also addressing education issues which affect women and children around the world. Through her Foundation, Gandhi devotes her life to charity and help for those in need, notably abused and hungry children, widows, the sick, the deaf and blind. She is particularly interested in education as the stepping stone to success.[4] Gandhi has supported charities with strong female leadership programs and workshops, in part because of the role models in her life: Hillary Clinton, Cherie Blair, and Gandhi’s own mother, an Irish woman living in India. These charities include the Cherie Blair Foundation for Women in the United Kingdom and the Eleanor Roosevelt Leadership Center in the United States.[5]
Gandhi is the founder of the Meera Gandhi Giving Back Award. The award is given each year at the Woodstock Film Festival to the director, producer or actor who best delivers a message of social change and who has a strong compassion for philanthropy.
Other charities Gandhi is involved with either directly or through her Foundation include the Happy Home and School for the blind in Mumbai, the Robert F. Kennedy Centre for Justice & Human Rights, the Cambodian Landmine Relief Fund, Centerpoint, Give to Colombia and The American Friends of Prince William and Prince Harry.[7]
Gandhi’s Foundation has also contributed to certain institutions of learning. In 2012, the Foundation funded a high-powered, state-of-the-art telescope, which was installed on the roof of the Harrow School in London.