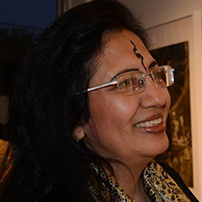 Meena Chopra is a Mississauga based poet & visual artist with an unbridled passion for words, space, colours and forms. She has been practising her poetry and visual art for over three decades now. A graduate in sciences, later qualified as a designer and then as an Artist Educator.

Born and brought up in Nainital, a Himalayan hill resort of Northern India, Meena graduated in science from Isabella Thoburn College, Lucknow, India. Later qualified as a designer in 1977 from Delhi and as an Artist Educator from RCM Ontario in 2009. After having a career as a designer for seven years with a couple of leading garment firms of New Delhi India, she later switched to fine arts and poetry, simultaneously pursuing her career in marketing and advertising as an entrepreneur. Primarily a self taught artist, she informally got trained and mentored under master artists of India, New Delhi, where she took visual art and sculpture classes as well.

She writes poetry both in English and her native language Hindi. She has authored three poetry books and has co-edited one anthology. Her poetry has been published in many literary journals world wide. Her poetry has been translated into German and Urdu. She has been a recipient of many awards for her contribution in art, poetry writing and community advocacy in arts and culture. The most recent ones for her contribution in arts and literature given to her in 2018 by National Ethnic Press and Media Council of Canada and first prize for her painting from Visual Arts Mississauga