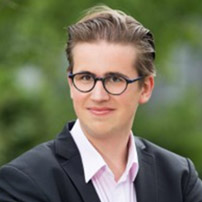 My political experience started in 2012, I was selected to participate in the Federal Youth Session, where 200 young people met to discuss politics in Bern, the capital of Switzerland. This event awoke my interest in politics and from that day, I decided to act and get involved.

Now, I am member of the Committee of the Green Party of Fribourg and candidate for the local Grand Council. Three weeks ago, I represented the Green Party at the local Trade Fair and today we are speaking up against the use of nuclear energies. I have also taken part in petitions for governmental actions.