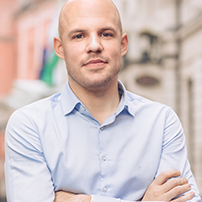 Chairman of Board of Directors & the CEO,Union hoteli d.d.

Matej Rigelnik started his career in 2008 as asset manager at NLB Investment Banking where he was also heading the Department for asset management between 2011 and 2014. In 2014, he became deputy director of NLB’s Private Banking sector. In 2016 he held the position of Director of Sector for Asset Management at Triglav Skladi.
At the beginning of 2017 he became a member of the Supervisory board at Union hoteli, d.d., and then subsequently appointed a member of the Board of Directors and Chairman of Board of Directors at Union hoteli, d.d. A graduate of University of Ljubljana’s School of Economics and Business, Matej holds the prestigious international Financial Risk Manager licence.