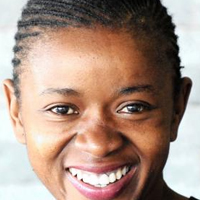 Masingita Masunga was born in Giyani Limpopo. An inspirational and phenomenal woman who dared to push the envelope and change the course of the term disabled. As a person living with Cerebral Palsy an abnormality in parts of the brain that control muscle movements and permanently affect body movement and muscle coordination, she has been able to beat the odds and become a force to be reckoned with. Masingita challenged the education system when she failed grade 12 twice because of her handwriting and from that experience she became an activist and has been making a difference in the country.

She is the founder of MISS CONFIDENCE SA the first beauty pageant for women with physical disabilities which was founded in 1999.She is currently the Managing Director of MASINGITA MASUNGA Media a company who’s business model focuses on a number of distinct but complementary businesses, operating in television production, exhibitions-conferencing and publishing thus creating a synergistic business group. “Masingita with confidence show” is a 30 minutes talk production that flights on Soweto TV on the DSTV cable network weekly. It is presented in English, Xitsonga, Tshivenda Sesotho and IsiZulu, The target audience is all members of the community young and old. The show features guests who undertake different life issues which are evident through people’s behaviours and circumstances. This is an inspirational show that helps South Africans find restoration, vision and purpose.

Over the years she has reached many milestones being the recipient of numerous awards for a range of achievements, including having a driver’s licence and being able to drive a car to the list below:

Masingita provides assistance needed by hardworking high achieving young people to access education and creating opportunities for better lives. She provides variety of support to current recipients including funding of school fees, accommodation, and youth development programs for youth across South Africa, both with physical disabilities and those affected by the pains of a broken society. Her first recipient of a school bursary, Taryn Deckford has just been accepted at the University of Cape Town to complete a Commerce degree in Accounting. While the others are still completing high school, Megan Deckford has been accepted at the Oprah Winfrey Leadership Academy for Girls in Johannesburg.

She is a living proof that if you dream it, you can achieve it and that impossibility is in the mind. Masingita is true inspiration on the African Continent and looks forward to building global relationships that honour the spirit of her purpose