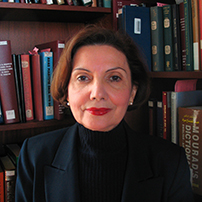 Chief of the African and Middle Eastern Division, Library of Congress

Dr. Mary-Jane Deeb is Chief of the African and Middle Eastern Division at the Library of Congress. She joined the Library in 1998, as Arab World Area Specialist, and later became Head of the Near East Section. She helped establish Rockefeller Fellowships for Islamic studies at the Library of Congress, led a Library of Congress mission to Baghdad to assist with the reconstruction of the National Library of Iraq, accompanied the Librarian of Congress on an official visit to Iran, and co-curated several Library of Congress exhibits, including one on “Voices from Afghanistan.” Before joining the Library of Congress she was the Editor of The Middle East Journal, Director of the Omani Program at The American University in Washington D.C. where she was teaching, and Director of the Algeria Working Group at the Corporate Council on Africa. She has also taught at Georgetown University and at George Washington University. She received her Ph.D. in International Relations from the School of Advanced International Studies of the Johns Hopkins University and her B.A. and M.A. in Sociology and Anthropology from the American University in Cairo. Deeb is the author of Libya’s Foreign Policy in North Africa, and co-author with M.K. Deeb of Libya Since the Revolution: Aspects of Social and Political Development. She is the co-editor with Mary E. King of Hasib Sabbagh: From Palestinian Refugee to Citizen of the World. She has also written over one hundred and eighty five articles, book chapters, and book reviews, for numerous publications including Current History, The Annals of the American Academy of Political and Social Science, International Journal of Middle East Studies, Muslim World, Mediterranean Quarterly, The Library of Congress Information Bulletin, and in a number of encyclopedias such as Encyclopedia Britannica, and Encyclopedia Americana. Deeb has participated in numerous conferences around the world, including one in Davos, Switzerland, during the 2018 World Economic Forum, and one in Nanjing, China, the same year. She has worked for the United Nations Economic Commission for Western Asia, UNICEF, Amideast, the US Agency for International Development in Beirut, and was also a UN observer for the June 1997 Algerian legislative elections, and returned to Algeria in 2000 to collect Algerian publications for the Library of Congress. In February 2011, Deeb led a training program in Dakar for bibliographic representatives from 11 West African nations, including Senegal, Benin, Burkina Faso, Chad, Cote d’Ivoire, Gambia, Guinea-Conakry, Mali, Niger, Sierra Leone, and Togo, to collect West African publications for the Library of Congress. She is a member of a number of professional organizations and serves on the Board of Directors of the African Studies Association. She has been the President of the American Tunisian Association between 2016 and 2018. Deeb is a frequent media commentator, and has appeared on the Lehrer News Hour, John McLaughlin’s One on One, CNN, ABC World News and CBS Evening News, and been quoted by The New York Times, The Washington Post, Time Magazine, The Christian Science Monitor, The Los Angeles Times, and others. She has received a number of awards, and is listed in the Marquis’ Who’s Who in America, and the Marquis’ Who’s Who in the World.