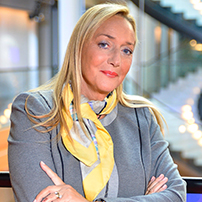 Member of the European Parliament, Brussels from Malta

Marlene Mizzi was born in Rabat, Malta, She studied at St Dorothy’s Convent, Junior College, and the University of Malta, where she graduated with an honours degree in Economics. Subsequently, she read for a Master’s degree at the Maastricht School of Management, the Netherlands. Her field of specialisation is Corporate Governance. Marlene speaks Maltese, English, and Italian fluently and has basic understanding of Spanish German and French.
Marlene Mizzi is Chairman of Amca Ltd, and has also served on the Board of Directors of Bank of Valletta. She is also a founding member of the national think-tank Today Public Policy Institute and has also served as Chairman of Sea Malta Co Ltd., the national shipping line, from 1997 to 2005.
Marlene Mizzi was the first Maltese woman elected to the European Parliament. She is a member of the Group of the Progressive Alliance of Socialist and Democrats. She is the Vice-President of the Petitions Committee, Member of the Internal Market and Consumer Protection Committee and substitute member of the Culture, Education and Sports Committee. She is also an active member of various parliamentary Intergroups, which address different issues and a member of the ACP-EU and China delegations.
Marlene Mizzi is also an Ambassador for the Erasmus for Young Entrepreneurs Programme 2016-2017