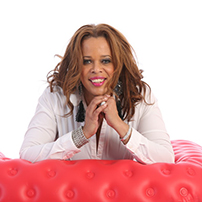 Marjorie de Cunha started my career in 1984 in Suriname as a PR Officer. At the age of 19, She hosted her own radio show and became a journalist.
In 1993, she became a social entrepreneur and founded the annual Miss Charme Pageant in the Netherlands, empowering contestants through educational and interpersonal training. The pageant presentation is without the ladies in bathing suits. Bureau Just March is my event business. In 2016 the first Miss Amsterdam Pageant was held . They couple the contestants with professional women in a mentoring program. Women Connect 2 Success was created in 2011.
In 2015 the talk show Women Talk by March was launched together with Motivational Speaking focusing on taboo subjects surrounding women. It is co-hosted by the television presenter, Jorgen Raymann and herself.
In 2016 she was knighted Officer in the Order of Orange-Nassau. In 2017 she is nominated ‘Amsterdammer of the Year’.