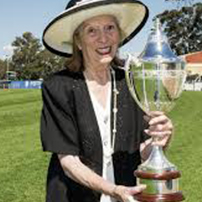 Marjorie Charleson’s professional involvement with the Thoroughbred Horse-racing industry in WA began in 1967 and included 16 years as Public Relations Officer for the WA Turf Club and Editor and Publisher of Racebreed Australia magazine for further 12 years. Racebreed won several Belmont Small Business Awards and inducted into their Hall of Fame in 2011; Marjorie was awarded the Australian Centenary Medal for Services to Racing and the Community. Racebreed Australia received a Lifetime Achievement Award from RWWA and the Racing Industry; honoured with a feature race-name ‘Marjorie Charleson Classic” at Ascot Racecourse since 2016 and has been a sponsor of the Belmont & Western Australian Small Business Awards of the WA Racing Industry Award since 2009.