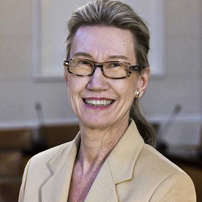 Marja Makarow is since July 2016 Director of Biocenter Finland. She is former Vice-President of the Academy of Finland – the Finnish Research Council (2012-June2016), Chief Executive of the European Science Foundation ESF (2008-2011), Vice-Rector of the University of Helsinki (2003-2007) and Professor of Applied Biochemistry and Molecular Biology. She was in 2008-2012 member of the Finnish Prime Minister’s Research and Innovation Council, Vice-Chair of the European Research Area Board ERAB that advised the Commissioner for Research and Innovation, and Vice-Chair of the Board of the Aalto University. She chaired the Finnish Research Infrastructure Committee and was ESFRI delegate in (2013-March 2016)). She is member of the Governing Board of the European Institute for Innovation and Technology EIT since 2012 and Vice-Chair of the Future and Emerging Technologies Advisory Group since 2014. Marja Makarow has carried out evaluations and steered evaluation processes at all levels of research-related activities from Principal Investigator (e.g. ERC panel chair) to research programmes, Centers of Excellence, infrastructure and innovation programmes, research assessments of universities and research organisations, and performance of funding organisations. She chairs since 2015 the Board of Technology Academy Finland that awards one of the world’s most significant innovation prizes, the Millennium Technology Prize. Marja Makarow has published her research in molecular cell biology in reputed scientific journals, supervised 19 PhD candidates to degree and supported 60 more as graduate school founder and director. Marja Makarow is member of Academia Europaea, the Finnish Academy of Science and Letters and the Finnish Academy of Technology. She has been decorated in Finland and France for her achievements in science and as promoter of international research collaboration.