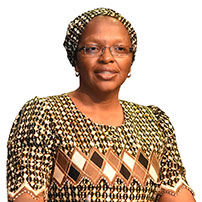 Marion Mbina-Mthembu is currently the Director-General in the Eastern Cape, having served as the HOD for EC Provincial Treasury, a DDG for Corporate Services in National Treasury.
Ms. Mbina-Mthembu also served as a Trustee in the GEPF for 4 years as well as in the Investment Committee.
Marion Mbina-Mthembu is an Associate Chartered Management Accountant and started her carreer as a finance graduate trainee with Unilever, moved through the ranks until Category Accountant level before joining Coca-Cola Southern Africa as a financial analyst. She then proceed to NATIONAL Brands as a supply chain analyst before she joining the Public Sector.
Marion was born in the Eastern Cape, matriculated in St John’s College Mthatha. She obtained a B.Comm from the University of Natal further becoming an Associate Member of the Chartered Management Accountants.