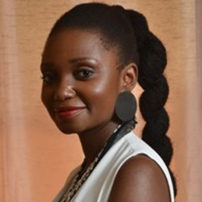 Marina is passionate about building bridges between people and organizations. Her strong diplomatic, networking and negotiations skills and her understanding of the Dutch and “African” cultures has led her to open doors to several African countries for the Dutch private sector, and vice versa.
Head of External Affairs and International Cooperation at the Netherlands-African Business Council, Marina also engages in initiatives such as the African Young Professional Network, Africa 2.0, and INCLUDE. She is the co-founder of Business Safari TV, a talk show about business in and with Africa where game changers, business leaders, researchers are given a stage to share their insights. In January 2016, she was nominated for the Netherlands Dream team development cooperation 2015 by the online magazine Vice Versa.

As Head of External Affairs and International Cooperation at the Netherlands-African Business Council (NABC), Marina is passionate about building bridges between people and organizations. She has an extensive international experience in trade and investment promotion between the Netherlands and African countries, specializing in private sector and business development. By utilizing her strong diplomacy, and negotiations skills with her understanding of the Dutch and “African” cultures, she has opened doors to several African countries for the Dutch private sector, and vice versa.
During a time when the world – Africa in particular – is facing the threat of terrorism, she continues to succeed in encouraging the Dutch private sector to work with the African continent. It is her strong belief that Africa’s development will come from economic cooperation and investment, thereby strengthening the business ecosystem with the support of the public sector, multinationals, SME’s, and startups (on a national and international level). She has proven experience in strengthening South – South cooperation as well as North –South development cooperation.
As an expert on Africa and development cooperation she also engages in different initiatives (African Young Professional Network, Africa 2.0, INCLUDE). These initiatives have two components in common: the first being to rebrand Africa, and the second to empower youth and entrepreneurship. Drawing from her experiences working with the private sector, she decided to walk in the shoes of an entrepreneur and launch her own company, Bilama Fashion. Through Bilama, she showcases different cultures (mostly African) using traditional fabrics.