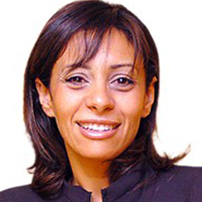 Marie Louis Bishara, Fashion Designer, partner and one of the owners of the textile Bishara Group was born in 1966. Marie Louis, the eldest daughter of Mr. Bishara the founder of the group, studied Fine Arts and Graphics at the Fine Arts University in Cairo. Followed by her fashion studies in France where she obtained her certificate in Fashion Design and Textiles from the french school Esmod Guerre LaVigne. She received trainings in several French couture houses such as cacharel, Dana cote d’azure working for Balmain and Mugler fashion lines. In 1989 Marie launched her first exclusive ladies wear line in her first show room exhibition in Cairo. From 1989 to 2007 Marie Louis presented thirty four Prêt a Porter and Haute Couture fashion shows in the beautiful Egyptian old palaces and historical sites, aired on national and international television. In 2007 she was invited by the President of the French Syndicat des createurs et des couturiers in Paris to present her collections on the official calendar during the Fashion Weeks in Paris to date. She was also invited by the Johannesburg Fashion week in South Africa as a guest of Honor to present her 2008 Summer Collection and in Tunisea during the Cartage Fashion week in 2010.