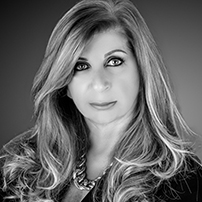 Founder of Hera, The Light of Women

Mirpuri has dedicated most of her life to the promotion of luxury services, mainly in the aviation field. Mirpuri’s background in aviation dates back to the 1980’s. Her family company, Air Luxor, in 1988 became the Authorized Sales Representative of Cessna, the prestigious American company of Textron Group, and continued to represent Cessna in Portugal and Spain until 2015. In her professional path in the aviation field, besides being Vice-President of Air Luxor, she was co-founder of UAT (United Air Taxis), co-founder of Netjets Europe, co-founder of Masterjet and founder and president of Jetlink. Besides aviation, Mirpuri is also a business consultant for major economic groups all over the world, and an investor in several businesses.
In 2018, she launched worldwide the first label of quality or luxury properties – Luxor Home Label, Exclusive Label by Marianela Mirpuri. This label is based on strict principles and backed by a network of professionals around the world. In order to support this label of quality and its network, she presented the Luxor Living Style magazine, featuring articles and the latest developments involved in lifestyle and sustainability. Marianela Mirpuri is also advisor to her family foundation – the Mirpuri Foundation, and is responsible for the development of large-scale projects such as the “Turn the Tide on Plastic,” a sustainability campaign of the Mirpuri Foundation.
Current international challenges for Mirpuri in 2019 include launching the unique concept and project for HERA, The City of Women.