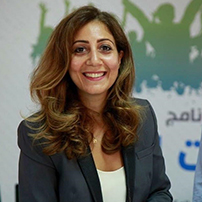 Mariam Farag is Head of Corporate Sustainability & Social Impact at MBC Group, spearheading the network’s corporate responsibility vision and social impact strategy. An award-winning advocate, public speaker and advisor for youth development and gender equality, she has more than 19 years of experience in sustainable development, humanitarian relief, media, corporate and social change in the MENA region and globally. In 2017, Mariam was awarded the C3 US-Arab Business & Healthcare Summit “Humanitarian of the Year” by the international organization, during the United Nations General Assembly Week in New York. The following year, she received the “Mother of Community Support” award at The Middle East MomPreneurs Forum in Dubai. She is also listed as one of the 25 most innovative female game-changers in the Middle East by The Tempest.During her six-year career at MBC, Mariam has successfully established and overseen the development of
the network’s social impact arm, MBC Hope into an award-winning global sustainable initiative. The enterprise focuses on four core areas; entrepreneurship and startups; capacity building and work
readiness; education and child protection; and humanitarian relief. MBC Hope is currently used as a case study on the University of Southern California’s MBA program alongside other global media
conglomerates such as WB, Disney, CNN and BBC. Under Mariam’s leadership, MBC has created strategic partnerships with various regional & international entities / brands positioning MBC Hope as a major global player in events such as UNGA in New York and Peace Week in Geneva. Other key achievements include the launch of Basmet Amal, a Ramadan special, which has raised US$7.8 million in donations over the last five years, and the first Facebook ‘live’ from a refugee camp in Lebanon generating more than one million views and US$250,000 in donations in four hours. Recently, Mariam’s took on a new project developing young talents in the film making industry in Saudi Arabia. MBC Edutain aims to prepare young film makers in Saudi in four disciplines acting, directing,
script writing and producing to lead the new dawn of Saudi film making. Mariam is a regular public speaker on gender equality, youth engagement and sustainability, speaking at a number of international forums including Women in Leadership Economic Forum, Youth Peace Dialogue with Generations for Peace at the United Nations General Assembly (UNGA) and Business for Peace by
UN Global Compact 2018. She is a member of a number of leading notable bodies, including the GCC Philanthropy Council, INJAZ AlArab Regional Board, UNICEF Leadership Circle MENA & GCC, UAE Advisory Board of Education for Employment (EFE) and Media & Communication Global Steering Committee of Education for Employment (EFE). She is also a brand ambassador for Dubai Capital Club, a Board Member of the Marwa Fayed Toy Run Foundation and a member of the Gulf Business Philanthropy Circle Charter. Prior to her appointment at MBC, Mariam was Director of Partnerships at The American University of Sharjah (2011-2013) and Head of Partnerships & CSR at Community Development Authority (2008 – 2011). Mariam has also worked with a number private and academic sectors such as the UNDP, UNHCR and
Weber Shandwick (PR). Mariam received her B.A in Political Science, specializing in International Relations from The American University in Cairo (AUC) and completed her M.A in International Relations and Political Theory from University of Westminster, UK. She is a native Arabic and English speaker, and a mother to two young boys she hopes to inspire to lead future change.