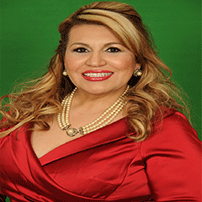 Maria Rios is the President and CEO of Nation Waste, Inc. (NWI), the first female Hispanic-owned waste removal company in United States history and one of the largest minority-owned companies in the state of Texas. NWI is a fully-certified, commercial waste disposal company specializing in construction, demolition, commercial/industrial non-hazardous waste removal, portable toilets and recycling services.
In 2018, Rios launched a new division, Nation Safety Net, which leverages a technology solution powered by IBM Watson IoT. In the U.S. nearly 5,000 people die and approximately 27 million work days are lost each year because of injuries in the workplace. To keep workers safe and mitigate the cost of workplace injuries, Nation Safety Net, in partnership with IBM, created an IoT solution that uses environmental sensors and wearable devices to identify potential dangers and to help employees avoid injury.
In 2015 the International Women’s Entrepreneurial Challenge (IWEC) announced Rios as one of the top 27 women entrepreneurs in the world. Fortune named Rios as one of the 2013 Fortune Most Powerful Women Entrepreneurs in the U.S. Goldman Sachs honored Rios as one of its 100 Most Intriguing Entrepreneurs. In 2015 Rios and NWI were featured on CNBC’s Blue Collar Millionaires, a docu-series profiling big personalities who have gained wealth “by getting their hands dirty…and rolling up their sleeves…with a can-do mindset.” CNBC marketed the Rios episode as “The $30M empire built on trash.”
Maria Rios is living the American dream, as she began her U.S. journey emigrating from El Salvador as a child. Her family came to the U.S. to pursue education and a better life. Through reliance on faith, a relentless work ethic and determination, Rios graduated from Houston Community College and earned her BA from the University of Houston.