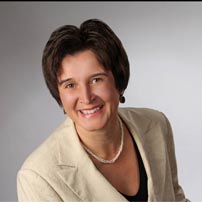 Member of the European Parliament, Brussels from Germany

Maria Noichl (S&D), is since 2014 a member of the European Parliament representing the Bavarian regions Oberbayern and Schwaben. She is a member of the Committee on Agriculture and Rural Development as well as the Committee on Women’s Rights and Gender Equality. The promotion of women’s rights and gender equality are very important to her, as she is active in the women’s section of the German Social Democrats since more than 20 years and was one of the co-founders of a helpline for victims of violence against women in her region. Prior to her decision to run for the European Parliament she was a representative of the Bavarian Parliament.

Professional career
• Realschule, Gesellenprüfung, Master examination
• Operations manager of a retirement home with 65 inhabitants
• Second course: Fachoberschule with Fachabitur
• State Institute for Specialist Teachers (first and second Lehramtsprüfung)
• 1993-2008 Specialist teacher at Grund- und Hauptschulen in Rosenheim,
local staff council chairperson for teachers of 9 schools (partially exempted)
• 2008-2013 Members of the Bavarian Parliament (spokeswoman for agriculture and forestry)
• In 2014, a teacher of nutrition and design at a state vocational school (until the election to the Europaparlament)
Political career
in Rosenheim:
• since 1991 active in the Ortsverein and the Arbeitsgemeinschaft Sozialdemokratischer Frauen (ASF), former chairman of the jury
• 2002-2014 councilor in the city of Rosenheim
• 2003-2015 subordinate chairman of the SPD Rosenheim city
in Oberbayern:
• since 2007 Member of the district council of the SPD Oberbayern (currently in the managing district district council of the SPD Oberbayern)
• since 2010 ASF district chairman Oberbayern
in Bavaria:
• 2008-2013 Members of the Landtag
• since 2015 member of the SPD country board
in the Federation:
• Delegates for various federal parties
• Member of the Bavarian delegation in two elections of the Federal President
in Europe:
• since 2014 MPs in the European Parliament
o Member of the Committee on Agriculture and Rural Development
o Member of the Committee on Women’s Rights and Gender Equality (FEMM)
o Deputy Member of the Development Assistance Committee
o Delegation to the ACP-EU Joint Parliamentary Assembly
o Delegation to the Euro-Latin American Parliamentary Assembly
o Substitute member of the delegation for relations with the countries of Mercosur