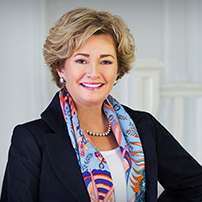 Maria French is the President and Chair of Terra Nova Solutions, a clinical documentation company servicing hospitals and clinics throughout Canada and the United States. As a young woman in the 80s and 90s trying to raise a family and develop a business, Maria French showed her strength of character by forging ahead at a time when there were little, if any, support services for women entrepreneurs. Her many businesses over the years have not had “bricks and mortar” structures; they have been service-based, which made financing particularly difficult. As is often the case with Maria, a host of challenges only served to steel her resolve and set her determination.
Maria is well-known and respected in her industry of health information management and her connections to the leadership of large healthcare organizations throughout North America continue to open new doors to opportunity. Within a short period of just 15 years in the industry, she was qualified by a Superior Court in the US as an expert witness. This is testimony to her knowledge and abilities.
She has earned an Institute of Corporate Directors (ICD) designation, completing the Directors Education Program at the Rotman School of Management, University of Toronto. She is currently enrolled as a second-year participant in the Leading High Growth Business Program at Harvard University.
Maria has gained the respect of those in her industry, including colleagues, competitors and customers through professionalism, determination and the quality of services provided by a strong team under her exemplary leadership. Those who know Maria personally are not surprised that her strength of character has endured and she has become an enormous success in an industry that is little known among the general populace.
Maria’s profile has been further bolstered through a December 2018 feature in Forbes Magazine: https://www.forbes.com/sites/geristengel/2018/12/05/how-to-escape-the-commoditization-of-your-industry-without-becoming-a-low-cost-provider/#38771a5a6778
She is a SheEO activator, https://sheeo.world/, an organization of radically generous women investing in women owned businesses. She has been a guest speaker at regional, national and international industry events.
She is also a member of the Women Presidents Organization (WPO) https://www.womenpresidentsorg.com/ a nonprofit membership organization for women presidents of multimillion-dollar companies;
She is a member Women’s Executive Network (WXN), https://wxnetwork.com/wxn/about-wxn/ a member-based organization, exists for the advancement, development and recognition of professional women in Canada. Women promoting women is business is at the very core of her belief.
Through a variety of media including podcasts with business bloggers and writers, Maria French is today recognized as the personification of entrepreneurship.
The commitment to community has never been far from anything that she has done in her life. Schooled in the tenet that “of those to whom much is given, much is expected.” She has lived a life of charitable giving both monetarily and in actions. She was one of the first women to join Rotary in 1990, where he served for 25 years, and was awarded a Paul Harris Fellow for her contribution. She has been involved with Habitat for Humanity, and a multitude of local charities in her own Canadian city.
Maria French is someone who hit the ground running in her early twenties and has not ever slowed her pace. She raised a family, volunteered in her community, provided guidance and encouragement to young entrepreneurs and employees and has faced entrepreneurial challenges with tenacity, steeled resolve, and a sense of humour. She is the epitome of the definition of entrepreneurial spirit.