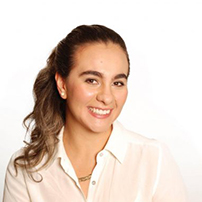 General Secretary of the Board of Directors , Institute for Training and Political Development AC

Fernanda Bayardo Salim, a member of the Institutional Revolutionary Party (PRI). She has a Degree in Political Science from the Autonomous Technological Institute of Mexico (ITAM). She is currently the General Secretary of the Institute for Training and Political Development, AC (ICADEP) of the CEN of the PRI. She was a constituent deputy where she participated in the drafting of the first Political Constitution of Mexico City. She had the opportunity to collaborate in the Federal Government as Director of Sectorial and Regional Coordination at the Mexican Youth Institute (IMJUVE) where she served in favor of Mexican youth.