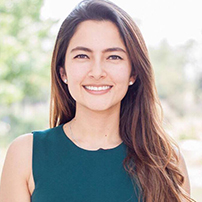 Guatemalan. Graduated as Reserves Lieutenant in the Adolfo V. Hall Institute. Bachelor’s in international Relations from the Technological Institute of Higher Studies of Monterrey (Tec de Monterrey) in Mexico, with exchanges at Universita Karlova V. Praze in Prague, Czech Republic and at the National University of La Plata in La Plata, Argentina. Her academic training has been extensive, which has allowed her to travel to different continents and learn about several topics, among the most outstanding: Women Scholarship for Peace – University for Peace, The MOST School – UNESCO, Institute of Leadership in the Americas – The Fund for American Studies.

In 2016 she graduated with a Master’s degree in Diplomacy, International Relations and Public Image from Galileo University, currently studying a Doctorate in Social Sciences in the Pontifical University of Salamanca.

She has held several jobs, but her vocation has always been social and international; Intern in the Permanent Council of the OAS, founder of Youth Iniciative San Marcos, in 2016 she founded with a colleague the Social Enterprise Me&Bo and worked as Project Officer in a Youth Against Violence. Currently she is a Junior Researcher in the association Diálogos and also President of Iberoamerican Youth, an international young leaders network with almost 100 members from 19 different countries that recently adopted the Sustainable Development Goals as a guide and framework of action for its projects