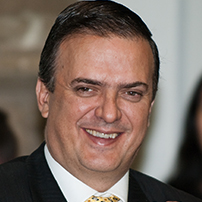 Marcelo Luis Ebrard Casaubón is a Mexican politician who, since December 2018, has been the Secretary of Foreign Affairs of Mexico. He has been a member of Morena since 2018. He was head of government of the Federal District from December 5, 2006 to December 4, 2012, being the first elected president of Mexico City to complete his six-year term, nominated by the PRD and being affiliated with this political institute until 2015, when he presented his resignation.
He also served as president of the Global Network of Safe Cities (UN Global Network of Safer Cities) from September 3, 2012 to February 3, 2014.