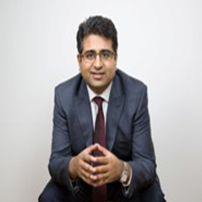 Manoj is the founder and CEO of London based India Inc. – which publishes the fortnightly ‘India Global Business’ magazine.

Prior to this, for 15 years Manoj ran his own law firm with offices in Westminster and Mumbai specialising in advising on transactions between the UK and India.

Manoj serves as a non-executive director on the Board of several UK and Indian companies. He also serves on the advisory board of the Commonwealth Enterprise & Investment Council.

In 2014 Manoj led the Research, Analysis & Messaging division of the Modi for Prime Minister campaign. He also has led several of PM Modi’s global outreach programmes, including organising the iconic reception at Wembley Stadium in 2015 where over 60,000 attended

Manoj is a founder-member and first President of the National Hindu Students Forum UK. He has served as a Trustee on the board of several charities and not-for-profit organisations.

Manoj was born and brought up in inner city Birmingham, UK. He is a graduate in law from the London School of Economics.