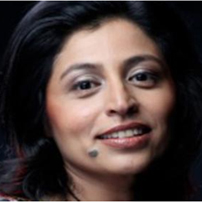 Manju Malhi is a TV chef and award-winning author of several cookbooks. She spent several years of her childhood in India where she experienced the vast and varied cuisines of the country.
In her cooking, she draws on her past and combines it with the realities of urban Western life, creating her own unique Brit-Indi style of food influenced by easy Indian home-cooking. She won the BBC’s Food and Drink competition in 1999 and cooked with Antony Worrall Thompson on BBC Two. Most recently Manju filmed a mammoth forty episode series for India’s largest commercial television channel creating Western food for the Indian viewers.