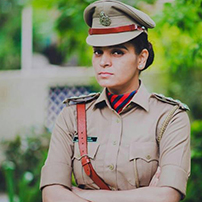 Manjita Vanzara was born into a family of civil servants. But that did not make her want to follow in their path, nor did her family pressurize her into choosing it as her career. So, after graduating as an engineer, she set her heart at becoming a fashion designer.Manjita completed her post graduation in fashion designing and started working in one of the leading fashion brands. Yet, few years down the lane, she is now an IPS officer — first female Assistant Commissioner Of Police (ACP) of Ahmedabad. Though Manjita came from a wealthy family, her parents were determined not to pamper her. This meant not having access to the cars at home and using public transport for all her travels. Hence, while growing up, she was consciously aware of the struggles of people around her. And that disturbed her enough to make her want to become a police officer and serve the society. Talking about that decision to Femina, she said, I knew I was doing well but my heart wanted more. I wanted to give more to society. I saw first-hand the problems that people came to my family with, and even as a child, I understood the gravity of their problems. So, Manjita worked hard to clear the civil service examinations and in 2013 she was made the Assistant Commissioner Of Police (ACP) of F-Division. A trained Bharatnatyam and Kuchipudi dancer, she finds her happiness in service to humanity than in earning in seven digits. And she is constantly looking for ways to break the glass ceiling and help more women serve in the police force. Talking about being an IPS officer in an interview with Humans of Amdavad, she said, Over the years I had a lot of good experience with people of our city. There are friends of mine who earn in seven digits but for me bringing a smile on a deprived woman’s face, or helping a child get education is worth more than seven digits. It has never been about money, it has always been about helping the people.