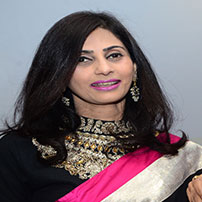 Manisha Kaushik is a gold medalist in Microbiology and a genetic engineer. She is the proud receipent of 12 gold medals to her credit from Nagpur University and still has her name engraved there for making a record.
She is from the army background and has a very cosmopolitan upbringing, though originally from Punjab has spent most of her time in gurgoan and delhi. She has been married to Mr Ayush Dev Kaushik who is a mechanical engineer. By the grace of almighty, she opened a business along with her husband in 1995.They started with 2 people and today havea strong team of over 100 people. She has been blessed with a daughter who is now pursuing her bachelor in business administration. She is good at multitasking, balances the home and office front and believes in giving her best to whatever she does with complete dedication & sincerity. Her family is her strength.
She is a first generation women Business Entrepeneur managing her firm and steering it to success. They are dealers for leading companies like Kirloskars, Grandmasters, Guardwell and Truffman .Interiors being her passion, the company has also ventured into this sector and expertise in office interiors. Also make strong rooms for banks and do facility management for various coorporates etc.
She has won the coveted Business Excellence Award from HITECH for 3 consecutive years. She has also been awarded by the Magicaka Group and WESS organisations for being a Women of Substance. She participated in” Mrs India Queen of Substance in 2014 where she was the first runner up, as well as won two titles Ms Compassionate and Ms Glamorous.
Being very active she has participated in various car rallys (to support various causes)and for the last two years has been winning the best driver and best maintained car organized by the WESS Ngo and Traffic police Gurgaon along with Maruti Suzuki. She is an ardent reader ,gardener and also loves to cook. She also models for various leading brands both national and International and writes travel blogs. She is an ardent trekker and has done the dangerous Chader Trek.
She has been a core member of Women On Own, International Women Federation ,YWCA, Okhla Traders Association , Iam SME,MSME to name a few.
She is also a social activist who has been working for uplifting and Empowering Women for the past two decades. This is where she got a chance to join INNERWHEEL CLUB of Gurgaon South City, in the year 2014 and become proud member of prestigious District 301. Within a couple of months after joining she became the Club Treasurer and went on to win the Best Treasurer of the year .She has served her club as Club Treasurer, Club Secretary, and in 2016 as the Club President. In the last 4 years she has participated in almost all the district events and has won many prizes for the same.
Last year 2016-17 she was the president of INNERWHEEL GURGAON SOUTHCITY. In her tenure the club has grown multifold .She was the receipient of the Best President award , Most Confident President, Appreciation award for well planned COV, Appreciation award for the joy of sports, Appreciation award for active participation in Project Week, Appreciation award for running Vocational Training for special girls, Appreciation award for overall performance, Appreciation Award for making a Happy School, Appreciation award for T-E-A-C-H., Appreciation award for Exemplory & commendable services in various committees, Running trophy for Vocational training, and 14 certificates for her contribution in various fields to improve the society. The certificates are “ TO fulfil the IWC objectives of Service & Friendship to Touch A Heart, Exemplory work done under-Vocational Training ,Hosting District Picnic-Saheliyon Ki Baadi, Mentoring a school team at Samaniya, Help to physically &mentally challenged, Eye Relief &Cornea Donation, Envirnoment Protection & Natrual Resource Conservation, Family Welfare & Consumer Guidance, Women Empowerment Safety, Legal Aids & Upliftment of Girl Child, Senior Citizens Welfare ,Health Care ,Blood Donation & Thalassemia Awareness, Education, Anti Drugs & Aids Awareness, Anti Child Labour & Child Rights, Sponsoring children for Asha Kiran. Last year she started the News Letter of the club “PRATIBIMB” so that all are able to be aware of the activities and can also contribute in various ways .She also got leaflets made and started the process of distributing along with news papers to make people aware of our organization. She also received the Most Accurate and Proper report award in the District Secretary meet.
During her tenure the club got the first ever chance to host a District Event “MANNAN” Incoming Officers Institute which was well appreciated .This year she is Committee Co chairperson for the Envirnomental Protection And Natural Conservation Committee. Various projects have been done to Save the Envirnoment as well as an Inter Dist project of Flood Relief for Bihar was organized by her wherein material has been sent to Bihar for the affected families. Also Recycle, Reduce and Reuse is one major project to protect the environment. She has been covered many times on India News and other channels of Haryana for social work.
Also has contributed towards the education of various under privileged children of BAGIYA as well as have adopted the Radiant Kids Slum school, supported Hamari Pathshala , started Skill Development for the girls of the Welfare of Physically Challenged and Hearing Impaired ,supported and started a Siliai Center at Jharsa to make the women folk independent and self sufficient, to name a few. She Is a life member of the Deaf and Dumb society and has also received appreciation award from the Governor of Haryana for her contribution to the physically handicapped as well as society and many other awards to her credit. She loves to participate in various contests and won the Monsoon Queen title from Greh Lakshmi , Teej Queen for IWC Gurgaon Southcity.