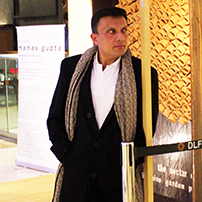 On of India’s top ten eminent contemporary artists, Manav Gupta, is recognised as a true visionary and a thinker who has taken art beyond art as a movement over his two decades of career by deploying it to raising consciousness on environment. He has established himself as a unique cultural ambassador, building bridges beyond borders for world peace, harmony and sustainable living.
Acknowledged as a ‘pioneer of reinventing pottery as global Public Art for Sustainable Development, taking local to global and craft to avant garde art, he has regularly been quoted by critics media and leading experts and luminaries from different walks of life as ‘one of India’s most erudite and versatile contemporary artists’, the ‘maverick genius’ of ‘pioneering innovations’, ‘piped to be the next big thing in international art’ and ‘a master of light and colour’.
Former Expert Committee Member of Republic Day celebrations, first artist-in-residence at the Rashtrapati Bhawan invited personally by Dr. Abdul Kalam, only artist to be invited by Environment Ministry to create one-minute-films on climate change, he is listed by Financial Times among ten contemporary Indian artists whose works would fetch good returns.
Widely exhibited around the globe, and with three global travelling trilogies, his works have been sold by Christie’s, Bonham’s, Philip de Pury and in several private and public collections.
His four biggest solo commissioned artworks – a ten thousand sq ft world-record, five-floor mega mural at Airtel, Indo-Bhutan friendship mural in Bhutan, commissioned by External Affairs Ministry, the giant ‘Waterfront’ Ganga Installation in Delhi and the Mega ‘Museum in a Mall’ Public Art Project at DLF Mall of India have secured themselves in books of records and international media, as also the ‘concept of art and music’ jugalbandi’ that he has pioneered by translating Live on stage the music of stalwarts globally like Dr.L.Subramanium, Anup Jalota, Madhup Mudgal, Shubha Mudgal, Jazz dancers in America, Egyptian folk dancers, Pratibha Prahlad, along with new generation of Rahul Sharma, Rakesh Chaurasia Vijay Ghate and others.
He currently pioneers the first ever Global Mega Public Art Project on sustainable development across thirty nine cities of the world.