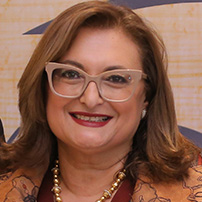 Manal Amin, Founder and CEO of Arabize and one of the very first Egyptian entrepreneurs in language technology. She holds a BA in Political Science & a Diploma in translation. Manal has 30-year experience in the field of translation, localization & documentation; and mentored many generations of localizers and technical writers.
Manal was part of many boards and councils in the IT & Localization Sectors locally and globally, which helped her gain more exposure and gave her the opportunity to offer her expertise in return.
She was always involved as a participant and speaker in localization events worldwide.
She got a special interest in training; so after training generations of in-house localizers, she decided to establish the first localization and content training center in Egypt. Now Arabize is volunteering with Egyptian Universities to spread localization awareness.
Due to her outstanding achievements in the IT Services Sector, she was nominated and awarded the African ICT Champion in 2013. Also Manal was ranked 77th among the 200 Most Powerful Women in the Middle East by Forbes ME Magazine, September 2014 for her outstanding presence, enthusiasm, and entrepreneurial spirit.
On the social level, Manal is an active member in Egyptian Women Community acknowledged by the Arab-German Chamber of Commerce, President of Rotary Club of El Obour,
And also a member of BWE21.