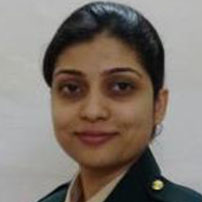 A lady with substance and courage. Has worked in odd circumstances and extreme climatic conditions. The strengths are extraordinary, some to mention are risk taker, challenge acceptor, innovator, compassionate, leader and many more.
Worked in sectors which effect development of India and make an impact on humanity.
1. In defence sector as a Quarter Master, Mechanical Transport Officer, Barack Store Officer (Independent command).
2. In Renewable sector as a Consultant for Solar Power Plants.
3. In Telecom sector as an Operations Head for India’s Largest state.
4. Now in Social Sector working for the University in Ladakh as a Program Manager.
Right now, supporting Himalayan Institute of Alternatives, Ladakh as a Program Manager in Ladakh for a cause to bring up the only Doer’s University in India. Executing the project where the R&D has been done in supervision of Mr Sonam Wangchuk and have constructed solar passive houses made up of organic and locally available resources in Ladakh which have recorded 30 degrees of a difference in outside and inside temperatures. This shall be further replicated once the prototype is fully constructed for ARMY in Himalayan areas where our soldiers will get comfortable shelter to stay in. Handling the selection and on boarding of the fellows in the university, who will get educated in Sustainable Habitat and Responsible Tourism.
In the team of innovators who are refurbishing old shipping containers to accommodate a cluster of fellows and staff in the ray of ‘Swach Bharat Abhyan’ for the University.
A marksman in jungle warfare shooting. The lady officer of Indian Army has also designed a 2.5 ton truck which can serve as a movable mess for jawans in state of war during her tenure in engineer regiment.
A Hot Air Ballooning enthusiast, has driven 1.5 lac km in 7 years as a hobby and spends her ‘me’ time in raising her daughter and teach her life skills.
Has handled failures in life which gave her experience filled with learnings stoking her hunger to strive and rise.