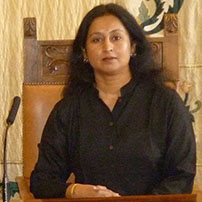 Maitreyee was born in Midnapur, West Bengal. Her fascination for the arts, especially the traditional forms of music and dance, took her to the deep interiors of rural Bengal, Bihar and Orissa in search of her objective – the preservation, promotion and propagation of the traditional culture of rural India.

She has her own repertory – Lok Chhanda Cultural Unit, it comprises of young enthusiasts from both rural & urban area of Midnapur Dist.They strive to revive the dying.

Choreography was her ultimate ambition and for a better understanding of this, she found it necessary to learn a classical form of dance. She joined Kathak Kendra in Delhi, under the tutelage of Pt. Birju Maharaj, as a recipient of the National Scholarship. She is also a graduate of Rabindra Bharati University – Kolkata, majoring in Manipuri Dance (for which she was awarded a gold medal).

Awarded the Charles Wallace Fellowship in 2003, she visited England and Scotland for dance workshops, choreographic collaborations and performances.