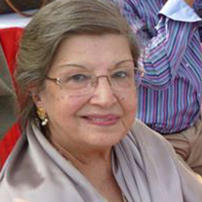 Maina Bhagat is Director of the Apeejay Oxford Bookstores Pvt. Limited, a leading national chain of bookstores. Headquartered at the 94-year old iconic Oxford Bookstore, Kolkata, she has been closely involved with conceiving and promoting creative literary initiatives that engage readers and audiences with books and ideas. She is also one of the founding Directors of the Apeejay Kolkata Literary Festival, an international festival reflecting the cultural and intellectual vibrancy of the city. Maina Bhagat serves a member of International Advisory Council at the Lahore Literary Festival.
With an equal passion for the Culinary Arts and Literature, Maina Bhagat pursued the former, briefly, at Cornell University and the Culinary Institute of America, culminating in her fortnightly food column in The Statesman Kolkata in the 90’s, and her work as a Food Stylist and Consultant thereafter. She has been both an active participant and contributor to the life and times of the city, where she has lived for four decades.. She interacts actively with the educational and cultural sectors of the city and nationally, and, is a keen observer – and reader – of the life of a bookstore!
An Honors Graduate of the Presidency College, Madras University, Maina Bhagat was recently awarded for her contribution to the Book and Publishing Industry by the Governor of West Bengal.