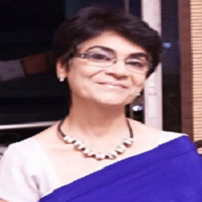 Mahiema Anand is a filmmaker, who also calls herself an explorer/seeker. She translates her journeys and varied experiences into her films, to provide inspiration and bring a difference to people’s lives, just the way these special experiences did to hers! Every journey into making of a film becomes ‘one full life lived’ for her. She firmly believes that film making is a tool she has been gifted with; hence it becomes her responsibility to disseminate the discerning knowledge to people through one of the most powerful tools of communication! Approximately 10 years ago she changed the direction of her genre from fiction to making films related to spirit and human evolution – understanding and exploring the unseen, unheard and mysterious. This led her into understanding and seeing her life anew, learning and unlearning and a journey into self-exploration! She started her career in the late 80’s, working with advertising agencies, and in the late 90’s Mahiema started to work as an independent producer/director on an international platform, doing diverse projects for Indian, American and European TV networks like Zee TV, Star, Sahara, Columbia Tristar, ARTE, Zone Reality, Turner Broadcasting System, TLC Discovery and Capital TV. Being a dancer, and then a filmmaker, opened up new vistas in the areas of harnessing universal energies and healing the ‘self’ and the ‘other’! So, today, Mahiema represents the Five Cosmic elements, the combination of which she uses as an Experiential Healer! Dance, films, storytelling, signs & symbols and travel, form her core! Moving from one form to another, Mahiema integrates the forces of nature and attempts to create journeys (inner and outer) of transformation and fulfillment. Her journey continues and with each step she takes, it elevates her further into self-discovery.
To know more about Mahiema’s work log onto www.zonstacreation.com and some of her films can be watched on youtube channel Zonstacreation.
She can be reached on +91 9910803460 / +91 9910166360
Mahiema.anand@gmail.com
For her transformational retreats write to her on ontohigherrealms@gmail.com