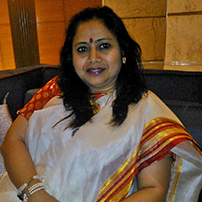 Madhavi Shree, is a journalist, blogger & poet based in New Delhi for last ten years. She has been an active media professional for the past 15 years. In 2010-2011, She won LAADLI MEDIA AWARD for Journalistic Work on Women Issues for her blog BAKBAK. Besides, she has won two more awards in features writer category in NCR from MEWAR INSTITUTE and one more MEDIA MAHARATHI, PEOPLE ‘S CHOICE AWARD from EXCHANGE OF MEDIA GROUP in 2013. She is been recently appointed as the Member of Internal Complain Committee of Global Payments’ Asia Pacific India Office for the Sexual Harassment of Women at Workplace ( Prevention , Prohibition & Redressal ) Act 2013
Now She is coming up with her website portal only on POSITIVE NEWS called POSITIVE NEWS WORLD. She work in print , electronic & online medium. She is associated with Mass Communication education for the last 5 years. She has been the State Coordinator for LAADLI MEDIA AWARDS for 2012-13 , 2013-14 , 2015-16 & 2016 -17.
She was invited by LOK SABHA TV channel for their program on GENDER DISCOURSE as a panelist on various occasions. Her first novel “WAH! YE AURATE ” came in this WORLD BOOK FAIR in Delhi at Pragati Maidan. A collection of poems in Hindi ‘PRITHVI KE SPARSH KI TARAH’ was published in 2013.
She translated a novel of Senior IPS ( now Rtd) officer Dr Nazrul Islam from Bangla to Hindi.
She has won the election of the Managing Committee of Indian Women’s Press Corps , New Delhi four times. She is also working for the cause of Housing and policy change in Banking system for easy procurement of personal / other loan at the reasonable interest rate to Single Women.
She has done her Master in Commerce from Calcutta University. CA ( inter) from ICAI
PGD in Mass Communication from Makhanlal National University of Journalism in Bhopal.
International Business & Marketing course from ICFAI. Certificate course in CHINESE Language from School of Foreign Language, Ministry of Defence, Government of India.