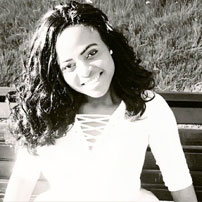 Madelle Kangha is the Founder and President of JumpStart Academy Africa, a for impact social venture which seeks to transform Africa by fixing a broken education system. The Academy ensures inclusive and equitable quality education by improving learning outcomes for young people whilst supporting their personal and professional development. Since commencing operations in 2014, JumpStart Academy Africa has trained over 500 students, impacting them in the areas of Academic Excellence, Civic Engagement and Enterprise Creation. The Academy has also reached over 2500 students through community outreach programs and summer camps.
In recognition of her work with JumpStart Academy Africa, Madelle has been featured by Forbes as “Innovative Africans fixing a broken Education System”. She has also received awards and recognition from the Queens Young Leaders, American Express Emerging Innovators, Ashoka Changemakers, One Young World and Vital Voices. She was recently named as one of the 50 Most Influential Young Cameroonians 2016 by Avance Media Africa in the Personal Development & Academia Category.
Madelle is an alumnus of the African Leadership Academy, Watson University, the Monterey Institute of International Studies; and she holds a Bachelor of Arts in Law and Anthropology from the London School of Economics. Madelle is also the Founder of Youths4Change, a youth-led community based organization which mentors youths of all abilities across Cameroon. Madelle’s vision is to be a leading social entrepreneur, a mass recruiter of local change makers; a role model proving that citizens who channel their passion into action can achieve the impossible.