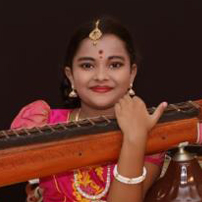 M.L. Rojasri, aged 9 is an excellent classical dancer, singer, veena player, folk & western dancer, nattuvangam player and a jathi reciter. Roja sri started dancing at the age of 3. She has performed more than 500 dances in more than 100 stages. She plays veena to any song spontaneously by listening. For the past one year she has ventured into reciting Jathi for the bharathanatyam performances.
“I got influenced by seeing my mother, Mrs.Leelavathi Raja who is a music teacher. When kids of my age play outdoors in the evening, I like sitting with my mother admiring the way she handles her dance classes. My mother owns a school of arts titled, “Ganesh Natyalaya” in Madurai and teaches to more than 400 students. I have seen my mother’s students emerge as dance teachers at a very young age and seek her blessings for their further aspirations. This created an affinity towards arts related to our culture. The idols in the temples fascinated me and the dance postures of Lord Shiva in Sivathandavam inspired me the most.” Says Rojasri.
Rojasri got innate talent to grasp through observation and produce it immediately. She started handling bharathanatyam classes at the age of 6. Her mother says that she has never had classes for Jathi, but her passion towards art and her skills in listening has made her to recite Jathi for dance performances. She has sung Jathi in the recent Salangai Pooja and Arangetram done by her mother’s students.
She is a school topper in academics and she says that her involvement in Arts has given her the capability to excel in academics.
‘Meenakshi Pillai Tamil’ is a set of poetry belonging to the oldest Tamil Sangam Literature which sings of the birth and stages of goddess Meenakshi depicting 10 stages of her growth. Roja sri sings all the songs from her childhood which is indeed the blessing of Goddess Meenakshi herself to give Rojasri the ability to sing all the songs.
At the age of 6, she completed ‘Salangai Pooja’. She has been honoured with numerous awards which include:
‘Bharatha Sri Award’ from Karur Natyanjali in 2016.
‘Young Talent Award’ from Surya Festival conducted at Lakshmi Sundaram Hall in 2017.
Got the first prize in classical dance for 3 consecutive years conducted by Government Music College in 2016, 2017 and 2018.
‘Madhavi Award’ from the Senior citizens club of Madurai in the year 2016.
‘Valarum Thalir’ award at the Mutthiah Mandram in the year 2016.
At this very young age, she has ventured into many aspects of our traditional arts and has emerged out as a child prodigy with her passion and perseverance in the field of arts.
We wish her good luck to reach the goals in all her endeavours.