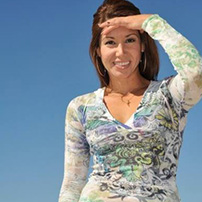 Luz Velia Herrera grew up in a family of 5 siblings. She is the middle child. Luz Velia has 2 older brothers and 2 younger sisters. Luz Velia grew up in a very loving, and warm family. She considers herself very fortunate to have had 2 very dedicated, and responsible parents that provided a strong family structure with plenty of boundaries and rules. In other words, she was given a very fortunate start in life. Luz Velia spent her childhood in a small town, attended private schooling all the way through High school at Colegio La Salle she was an enthusiastic and dedicated straight A student all the way through High School. She graduated High School early at the age of 16 and decided to apply for Medical School. Luz Velia got accepted into the UAG (Universidad Autonoma de Guadalajara) Medical program class of 1992. Luz Velia did her medical studies with focus and dedication always at the top of her class. After this she decided to move for a while to California and study English, she figured it will be very helpful in the future with her medical career. Luz Velia enrolled in English studies in CA and immersed in the learning of this new foreign language. She moved to a city near Los Angeles to live with an American family that gave her the opportunity to practice English on a daily basis, in a native speaker setting. She loved that experience so much that she ended up living with them for a span of 5 years; during which time she helped with the rearing of their child, and did other voluntary work with habitat and the homeless in CA. At the end of that period she had decided to move permanently to the USA. Luz Velia realized the opportunities for her to grow were amplified staying in America. Luz Velia decided to pursue an American College Degree so she applied for a student Visa and enrolled at the University CSDH (Cal State Dominguez Hills) were she pursued a degree with a double major in Philosophy and Psychology. Her intention was to properly prepare herself to help the community. Luz Velia has always strived to prepare herself the best she is able to, always shooting for excellence in all areas. Luz Velia is an avid reader, specially of non-fiction literature; as well as spiritual readings. She considers is very important to keep a balance between mind, body, and spirit in order to offer the best version of yourself to the world. Luz Velia takes life as a journey and strives to reach her individual potential on a daily basis. Her personal philosophy is: “We are all part of a whole which is this Humankind, whatever you do to yourself has worldly repercussions”.