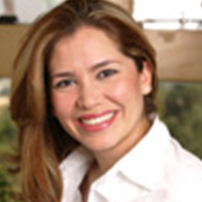 Ludivina Herrera is a solid academic that has contributed for the last 21 years to the best private university in Mexico: Tecnológico de Monterrey. She got her PhD in Business Administration from Charisma University (2018), and her Master in Business Administration from the Instituto Tecnológico y de Estudios Superiores de Monterrey (ITESM), campus Mexico City, (2001). She holds a Bachelor in Financial Administration also from the ITESM (1998), campus Guadalajara. Her personal and professional life have led her to develop abilities such as problem solving, exploration, detection of new threats, analysis, planning and innovation. These abilities has been developed under certain set of values such as honesty, respect, tenacity and loyalty. Her main interest is to help others to reach their goals. Ludivina Herrera has been Regional Director of Management and Leadership Department, at Business School, at Mexico City Region; previously, she was Program director of Management bachelor and Entrepreneurship bachelor program at Tecnológico de Monterrey, Campus Santa Fe. She has been responsible of the Entrepreneurship Certificate for Undergraduate Careers. Ludivina has been member of the ITESM Business School faculty since 2001 and had taught administration, entrepreneurship and human resources subjects for all the business careers. She also has been the management director of the Center of Organizational Studies (CEO for its Spanish initials), working with Mexican industries in academic extension
programs, especially on the pharmaceutical industry. In addition to her docent responsibilities, she developed directive positions in the Continuing Education Division, as Management and Finance Director and Public Relations Director; she also collaborated as Management & Financial Director of Executive Education at Tecnológico de Monterrey, Campus City of Mexico. Ludivina Herrera has been trained in different topics abroad, in business topics such as Conscious Capitalism, at Babson College; Digital Transformation from MIT Sloan & Emeritus; didactical techniques, such as Cases
Methodology at the University of Western Ontario, Canada and Problem Based Learning at the University of Maastricht, Netherlands. She had participated also in a tri lateral program between Mexico, USA and Canada at the Program NASSAM (North American Summer School for Advanced Management) with the University of Texas at San Antonio (UTSA) and the University of Calgary, Canada; she holds a certification the Harvard Business School, in Participant Centered Learning. She holds also a Certification on Entrepreneurship for Babson College (2009). Recently, she has been certified in
Management Board from the IMMPC (Instituto Mexicano de Mejores Prácticas Corporativas – 2018), she got a Certification in Digital Transformation for the MIT Sloan (2018), and she just completed a Certification in Conscious Capitalism with Raj Sisodia, the author of the idea (2019) from Babson College. In addition, her principal interests are traveling, art appreciation, talent studies, organizational behavior, reading, and learning. Tecnológico de Monterrey Tecnológico de Monterrey was founded in 1943. The Tec is a private, non-profit institution, independent and detached of political and religious parties. The effort of Tec de Monterrey and all its campuses is supported by civil associations, through a large group of prominent leaders from all over the country committed to the quality of higher education. Each year, the advisors of these civil associations meet to set the goals that should guide the big decisions, aimed at the Tec de Monterrey to fulfill its goal of becoming an engine of development of communities and the country. For its functioning as an educational institution, Tec de Monterrey enjoys the status of Escuela Libre Universitaria
(Free Universitary School). Since 2018, the Qualifier QS ranks Tec de Monterrey as the best private university in Mexico. It is also in the top three of Latin American universities. It is listed as the University #158 of the world and the #29 of the World’s Private Universities. It is considered the #10 in entrepreneurship in the world. To employers, Tec is the best at the national level, and is considered the #52 globally. At Tecnológico de Monterrey we generate opportunities to develop and transform the best talent into a transformative potential in Mexico. Tecnológico de Monterrey holds national and international accreditations both as an institution and of its academic programs that its different campuses offer. In the United States, the University Commission of the Association of Schools and Universities of the Southern United States (SACS) to award professional degrees and academic degrees of master’s and doctorate accredit Tecnológico de Monterrey. In Mexico, the Federation of Mexican Institutions of Private Higher Education (FIMPES) accredits Tec de Monterrey. Tecnológico de Monterrey has 91,200 students, 9,916 full-time teachers, in 26 campuses and 2 academic medical centers. The number of graduates of this institution amounts to 246,324 alumni.