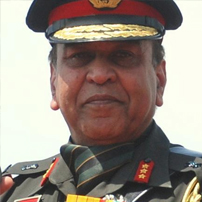 A second generation Army officer, Lt Gen Syed Ata Hasnain, PVSM, UYSM, AVSM, SM, VSM & BAR, has extensive experience in the handling of turbulent situations throughout his career which gave him hands on insight at different ranks in diverse environment such as Sri Lanka (as part of IPKF), Siachen, North East India , Mozambique and Rwanda (as part of UN Forces) and most frequently in Jammu & Kashmir where he served seven tours of duty ending as the Commander of the Srinagar based 15 Corps.
The Hasnain family has the rarest distinction of having ten military honors and awards to its credit and the only one with father and son both being awarded the Param Vishisht Seva Medal by the President of India.
Educated at Sherwood College Nainital, St Stephen’s College, Delhi and Kings College, London General Hasnain has also done strategic level long exchange programs at the famous Royal College of Defense Studies (RCDS), London and at the Asia Pacific Centre for Security studies (APCSS), Hawaii. He also has an M Phil in Defense and Management Studies from the Indore University.
General Hasnain uses his vast experience and education to research and write on strategic issues focusing on Kashmir, Afghanistan, Pakistan, China, Middle East, Religious Radicalism, Internal Security Issues and Terrorism. He is the winner of the Capital Foundation Society’s Award for Excellence in Military Leadership and is a leading contributor to famous media houses of India. His repertoire of knowledge of Jammu & Kashmir is based upon his boots on ground experience spread across various ranks and appointments. He is reputed to have been largely responsible for turning the situation around in 2011-12 after three years of street turbulence which had seen Kashmir virtually paralysed. His public outreach and ability to relate with all segments of society was the game changer even as he ensure the most successful year for the Indian Army’s counter infiltration efforts on the Line of Control. He is now an important member of Track 2 diplomacy with Pakistan
He writes on various strategic issues for mainline print and online newspapers and magazines. A regular participant in National TV debates he is associated with Vivekanand International Foundation as Visiting Fellow and Delhi Policy Group as Senior Fellow and is also on the Governing Council of Institute of Peace and Conflict Studies (IPCS). He also recently conducted a most successful lecture tour of Bangladesh.
A reputed speaker he is regularly called upon to deliver motivation and strategic affairs talks all over India and abroad.