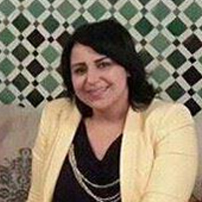 Member of the Moroccan House of Representatives

Loubna Amhair has been a Member of the Moroccan Parliament from 2011 to 2016, sitting on the Finances and Economic Development Committee and then Rapporteur of the Committee of Foreign Affairs and National Defense.
Previously, she served as Advisor to a State Minister, from 2009-2011, on political and technical matters.
As an engineer, Mrs Amhair has worked extensively in sustainable rural development and socio-economic empowerment of women, including evaluating educational and youth inclusion programs with the Ministry of Agriculture and Fisheries and as member of the State Secretary for Rural Development’s Cabinet.
She graduated in 2002 from HassanII Institute of agronomy on Ecology and natural resources Management.
In 2006, Mrs Amhair has been awarded by the good action plan certificate by the Japan International Cooperation Agency after her participation to the training course on Empowerment of Rural Women in both Tsukuba and Tokyo international centers in Japan.
She is also a Harvard Kennedy School graduate where she contributed to the Deauville partnership legislative leadership Program in 2012.
On the international level, Mrs Amhair is very active on Peace and Security issues. She has experiential and academic training in leadership, peace building, and women empowerment.
She is the VP of the international Network of liberal women for the MENA Region, an advisory board member of Mina’s List, an international NGO working on women’s political leadership empowerment, a member of the Forward Global Women NGO working on peace and security and UNSCR 1325.
She is working now on Gender mainstreaming in Agricultural programs and development policies with the Ministry of Agriculture, fisheries and rural development.