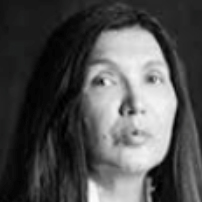 Leading the Way for Indigenous Women and Indigenous Superheroes, in Film and in Life

Loretta Todd is a Métis Cree Canadian film director, producer, activist, storyteller, and writer.[1] She belongs to what has been classified as the second wave of aboriginal Canadian film directors,[2] and has been internationally recognized for her non-fiction work, which strives to express the lived experienced of aboriginal peoples and communities through their own voices.
Loretta was born in Edmonton, Alberta, Canada in the late 1950s. Todd’s father, a member of both the Métis and Cree nations of Northern Alberta, held various jobs in order to support their eight children. Her mother was vibrant and loving. Loretta recalls a childhood filled with many family gatherings and various forms of artistic expression. Her experiences have also been shaped by her father’s alcoholism and the poverty that their family experienced.
Loretta left home at the age of twelve to set out on her own. She took on various jobs to support herself and became pregnant as a young teenager. She got in touch with her passions for writing and film-making while attending community college. In the late 1980s Todd’s enrolment at Simon Fraser University’s film school made her one of the first aboriginal woman to attend. For the first year she held a full-time job with the Canadian federal government while attending university, both her professional and student work centered around her passion for raising awareness about social inequalities that aboriginal communities face and social justice initiative that are aimed at improving the lived experiences for generations of aboriginal peoples to come.
As a child, Todd recognized the power of the moving image as a storytelling medium. While watching F.W. Murnau’s 1922 horror classic Nosferatu at age seven, she said she “began to understand that filmmakers used the tools of storytellers, which appealed to my Cree love of craft.” The movies also offered Todd a sense of possibility and escape. She describes her childhood as filled with artmaking and storytelling, but marked by poverty and the alcoholism of her father (a subject she explored in her early short My Father’s DTs). Todd left home at age 12 and during the next 10 years learned to support both herself and an infant daughter. At 18, Todd enrolled at a community college, where she quickly discovered her gifts as a writer, theorist and videomaker.
Before she began her filmmaking career she worked for the Union of British Columbia Indian Chiefs as a researcher and writer for Youth, Health, and Social Development. Subsequent to that she worked as a program officer for the Employment and Immigration Commission and as a job re-entry coordinator for the Musqueam Indian Band. Her earliest films were My Dad’s DTs, a 16 mm. experimental drama on adult children of alcoholics which she produced, wrote, and directed, Robes of Power,a video on ceremonial button robes, and a video installation entitled Red Road and Blue Neon.
She is knowledgeable about her culture – creating and producing an award-winning children’s series, Tansi! Nehiyawetan, that teaches kids to speak Cree, her father’s first language, as well as creating the first Cree language app, My Cree.
One of her biggest influencers is Dr. Leroy Littlebear and his partner Amethyst Firstrider.
Todd’s film style actively challenges traditional documentary film form, since she recognizes how films she consumed while growing up, which were produced by the National Film Board of Canada, reproduced harmful racist stereotypes about aboriginal peoples.
As she learned film theory and technique, her work became increasingly politically charged with an activist mindset. Todd engages with the film form in a way that allows her to bring light to problematic aspects of traditionally documentary style and the oppression that she has personally experienced and is part of the present reality for many aboriginal peoples within Canada.