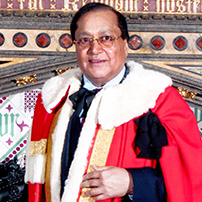 Rami set up his first business in 1987 with a mere 2 pounds capital from a rented room in Hayes and through his sheer dedication and commitment, he now runs two of Britain’s fastest growing companies with an annual turnover in excess of £200 million. He sustains thousands of British jobs by exporting British supermarket products to over 130 countries.

His company, Sun Mark Ltd, has received from Her Majesty the Queen, the Queens Award for Enterprise for an unprecedented 5 consecutive years in 2009, 2010, 2011, 2012 and 2013, and in the process made British business history as no other company has received this accolade before. Sun Mark has been added to the Sunday Times most profitable 100 companies in Britain in their “Profit Track 100” league table for the past three years running.

Rami won the prestigious Institute of Director’s the Director of the Year Award for 2013 and European Export Champion in 2014.

He is a Fellow of the Princes Trust and works tirelessly to enable The Prince’s Trust to reach even more of our youth to pass on his experience and expertise in inspiring the next generation of entrepreneurs. His message is that one does not need a rich family or an elite education to succeed in life. However, one needs self-respect, good work ethics, commitment and empathy for others.

Rami believes in supporting education and helping to provide better facilities for students. He has a clear message on this and says that if it had not been for his mother being an educated woman, he would not be where he is today. To support this he donated £250,000 to London South Bank University to set up a fund for Enterprise Excellence and to establish the Dr Rami Ranger CBE Centre for Graduate Entrepreneurship which provides a hub and workspace for students and graduates on enterprise programmes. The centre was opened by The Rt. Hon. Theresa Villiers, Secretary of State for Northern Ireland. Please click on the link to view video https://www.youtube.com/watch?v=qziYI5dcuDA He has donated £200,000 to the University of West London towards a new group pavilion in the campus library and for student hostel to enhance the facilities for the university students.
Rami donated £100,000 to the Gandhi Memorial Foundation Trust which is raising funds to erect a statue of Mahatma Gandhi in Parliament Square, London. Rami was quoted as saying “The world owes Gandhi Ji a huge debt of gratitude for liberating one fifth of mankind through non-violence thereby creating a better world”. http://articles.economictimes.indiatimes.com/2014-11-20/news/56303976_1_parliament-square-rami-ranger-mahatma-gandhi
He has donated £100,00 to the Thames Hospice, £150,000 Prince’s Trust, £50,000 to Combat Stress £75,000 Indian Gymkhana for a Gym.
0