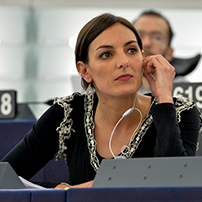 Lola Sanchez Caldentey (Valencia, 1978), is a Member of the European Parliament since May 2014. Graduated in Sociology and Political Science at the University of Granada, her political trajectory is marked by the irruption of the PODEMOS political party in the Spanish political arena, under which she was elected in the very first elections the party ever ran on.
Since her arrival at the European Parliament, undertaking tasks of GUE/NGL Coordinator for the Development Committee (DEVE) and member of the International Trade Committee (INTA), Lola Sánchez has mainly focused her political activity on scrutinising the European Union’s trade and development policy, with a special focus on Free Trade Agreements such as TTIP, CETA or TiSA, and the relationship between corporate practices and human rights, especially on the promotion of an international legally binding instrument in human rights law to regulate the activities of transnational corporations (“Binding Treaty”). She has also spearheaded the European Parliament’s call for
mandatory due diligence legislation for the garment sector, both as the Rapporteur for the EU Flagship Initiative on the Garment Sector and as a key figure within extra-parliamentary campaigns.
Due to the highest standards of coherence displayed within the framework of Development Policy, Lola Sánchez has been awarded twice (2015 and 2016) with the “Fair Politician of the Year” prize by the Max van der Stoel Foundation.