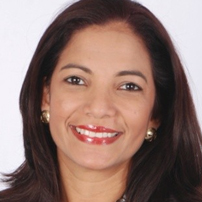 Lizzette Diaz has spent the last 25 years of her life working in media, writing, television and radio in Colombia, her country of origin and for the past 13 years in the city of Houston, where he has lived since 2003.
Her great passion for journalism and especially her desire to help the Hispanic community in Houston to have access to objective and effective information, led, with her husband, journalist Pedro Arévalo create Penta Communications in the 2006.
It is through this company the newspaper Sucesos was created and its been in the market for about eight years, informing the community about different subjects of interest.
Four years later they created the radio news, “Sucesos al Mediodía”, which is on the air Monday through Friday at 12 noon for the 920 AM, with news of the countries of Central America, Mexico, the U.S. and South America, with great acceptance Market.
In 2012, Lizzette Diaz, with her great vision as an entrepreneur and dedicated woman towards the media, has launched to market “Solo Mujeres Magazine”, filled with topics especially for the Hispanic women in our community.
Thanks to her work in the media and her constant support to several organizations, Lizzette Diaz has obtained various important awards and acknowledgements, which consist of: Businesswoman of the year from the Camara de Emprasarios Latinos in Houston, Leader of the Hispanic community by the Houston Dynamo and Budweiser in 2009 and Colombian Leader by Instituto de Cultura Hispana in October 2013. She also serves as a volunteer for various organizations such as El Minuto de Dios and El Festival Hispano del Libro. Lizzette is the organizer of the Expo Mujer, which is held in October and the Tribute to Hispanic women in which 25 outstanding Hispanic women are awarded to honor the celebration of the International Women’s Day.