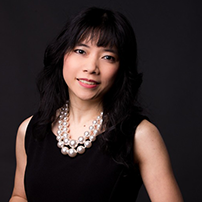 Shy by nature, Livia has cultivated her personality and her presence gradually over time, growing slowly into the international speaker that she is today. She has set a mission for herself: to inspire the people around her to discover their own voice. For a long time, she would hardly speak, never opening her mouth during the seminars and workshops that she attended. Today, however, all of that has changed. It did not come easy, but in her view, it was worth all the effort. Livia grew up in Indonesia in a normal, middle-class, traditional family. In the past, she spent most of her time hiding behind her family, buying into the cultural idea that “a good girl is a girl who serves the family and stays behind for the family.” She was existing, passing from one day to the next, but she never felt fulfilled. She was already in her late twenties, her friends married and having kids, when she asked herself a serious question: “Is this the kind of life I want for myself?”
The answer, of course, was “no.” She decided to follow her heart and pursue her dream. She left her million dollar business in Indonesia to become a “babysitter” and struggled as an immigrant in the Netherlands, until she became what she is now. There are no familiar words that can accurately describe a Livia Liyanto performance. Most of all, Livia Liyanto is a powerhouse who not only enthralls, and enlightens hundreds of rapt audience members, but who inspires them to remain long after his performance has concluded to become potential revenue-generators for her clients. A mother, serial entrepreneur, bestselling author, international speaker, business mentor & strategist, Livia is living a life more incredible than she could have ever dreamt for herself. She has met and trained by such high-profile figures as John Travolta, Steve Wozniak (The man behind Steve Jobs), Robert Kiyosaki, Dr. Nido Qubein, Hugh Hilton,
Jason Flom, Vanilla Ice, 50 cents, Frederik Eklund, George Ross (ex President Trump right hand) and some other American billionaires. She loves to bring you to your transformation journey.