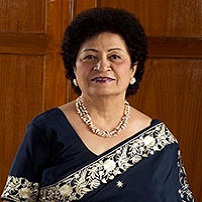 Born on 16th of September, 1944 to Sindhi parents from Hyderabad. One of 5 children, life was anything but mundane for Mrs. Lila Poonawalla. It was at the age of 3 Mrs. Poonawalla lost her father. It was then that she along with her family migrated to India. Her journey to India brought her to Pune, Maharashtra, where she would spend her formative years. After completing her schooling from the Mount Caramel Covent School, Mrs. Poonawalla was determined to walk down the unusual path and carve a niche for herself. She created history by becoming the first Woman Engineer graduating from the Mechanical stream of the College of Engineering, Pune.
After completing her graduation, Mrs. Poonawalla began her corporate career as an apprentice in Ruston & Hornsby, it was here that she would eventually meet and marry the love of her life Mr. Firoz Poonawalla. Since the company policy did not allow married couples to work together, Mrs. Poonawalla decided to move on, while Mr. Poonawalla stayed back.
Mrs. Poonawalla joined Vulcan Laval as a trainee engineer. It was at Vulcan Laval, that Mrs. Poonawalla would get the opportunity to truly unleash her potential. After working her way up the ranks, she went on to become one of the first Woman CEOs in India. Mrs. Poonawalla’s hard work never went unnoticed, as she went on to become the chairman of Alfa Laval, soon after she took over the responsibilities of a CEO at Tetra Pak. Holding both the positions till her retirement in 2001.
She started her own Consultancy Services Company “Lila Consulting Services” in 2000 and through this set up, she works as a Corporate Advisor. Currently she is A Strategic Advisor to Erehwon Consulting and SmartCloud Infotech Private Limited, and on the Advisory Board of ThyssenKrupp Industries India Pvt. Ltd. She has been an advisor to Schlumberger of USA and Arco Safety equipment of UK.
Today, Padmashree Ms. Lila Poonawalla is the Chairperson of Lila Poonawalla Foundation. Presently, a Director on the Board of KPIT Technologies, NobleTek PLM Solutions Pvt. Ltd., Pragati Leadership, Blossom Industries, Bajaj Alliance Life Insurance, Bajaj Alliance General Insurance, Volvo Escher commercial Vehicles, Impact Automotive solutions Ltd, Nihilent Technologies and Chairperson of Board of Governors’ IIT Ropar.