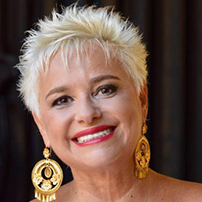 In 1980 Mayte entered as a student of Social Communication Sciences at Universidad Anáhuac in Mexico City, where she remained for two years before giving an international turn to her studies.
In 1982 she moved to San Antonio, Texas, United States, where she continued her studies at Our Lady of the Lake University. From that institution she graduated with a Bachelor of Arts in Media.
Mother of two children: Tommy and Isabella, who are as she says, “the engine of her life.” After ten years of relationship, Mayte decided to separate and move on with her children. Currently she continues “happily divorced.”
Mayte practices Arabic dance (belly dancing) as she has a special fascination for Morocco, a country she frequently visits. One of the things Mayte likes best is traveling. She loves to know the world and explore different cultures and countries. For this reason she devotes much time to it.
Mayte has been in the Capitol speaking about the importance of the approval of the Health Disparities project and is involved in the creation of several initiatives that will improve the health conditions of the Hispanic population. In 2010, the National Honey Board Organization named Mayte its spokeswoman in an effort to promote the consumption of 100% pure honey.
Currently, Mayte participates by presenting several television programs, conducts its radio program “Arriba con Mayte” and presents motivational capsules in various stations of the American Union.
Mayte is a tireless spokeswoman for the fight against cancer and travels around the world giving motivational talks and inspiring to live a full life.