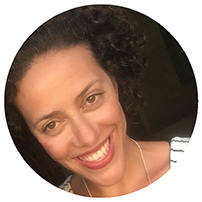 Daughter of a mother and grandmother cooks, she has always lived surrounded by unusual recipes and ingredients in an ordinary Portuguese house. There was always homemade pizza dough and it was normal to eat quiche at lunch and vegetable curries at dinner (strange thing 25 years ago). The food has always been a subject of interest in your home.
At 16 she became a vegetarian (after two years of insistence). At 22 he became omnivorous again.
She studied design and worked as a creative designer / director in a well-known fashion brand. She has two young children she adores and a husband who supports her in (almost) all crazy ideas. The birth of the first child, as with many mothers, came to shake all convictions and brought it back to the study of food.

At 30 he created Trinca, a brand of biological and gluten-free snacks with their own recipes and already awarded three times at the Great Taste Awards. It is considered in constant learning and does not take for granted any of its present “truths” unless there is no other way but the one of the real food, with ingredients of truth. He is still surprised by the magic that happens when you add flour, water and an oven in the same room.