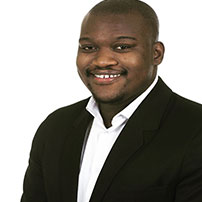 Letlhogonolo Maimane is a fourth year Bachelor of Laws (LLB) student at the University of Johannesburg. He began his student activism at an early age of 12 when he was elected as a class representative in his RCL. In 2012, he was elected as the Provincial Deputy Chairperson of Congress of South Africa Students (COSAS) in the North West Province, before that he was leading COSAS at branch and sub-regional level.
Outside politics Letlhogonolo is interested in community engagement and development. In 2014 he started his own company Platinum Adventures Green Evolution- PAGE and was later appointed as part of the task team of the Youth Chamber for Commerce and Industry in Madibeng sub-region. After being admitted into university Letlhogonolo was elected into the First Year Committee of the University of Johannesburg’s faculty of law and was subsequently elected once more into the University of Johannesburg’s Student Parliament. It was in the same year that he was elected as the Branch Secretary of Black Lawyers Association Student Chapter.
Letlhogonolo is passionate about the law and politics and aspires to be an advocate one day. His other passions are environmental law and mining litigation, and more recently cyber security and Artificial Intelligence Law.
Letlhogonolo also served as President and chairperson of the Student Representative Council of the University of Johannesburg in 2017 and is also a member and alumni of the 2017 South African Washington International Programme (SAWIP). Letlhogonolo has recently been