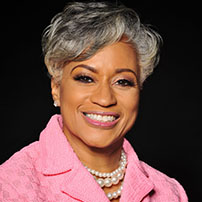 After a highly successful tenure as the Director of Community Relations and Corporate Partnerships for Rock Ventures, parent company to Quicken Loans, Leslie Andrews launched Daisy Ventures LLC which is the parent company for her three other companies. These companies are: Leslie Andrews Consulting – specializing in nonprofit development and training; Leslie Speaks! – delivering motivational and corporate speeches for numerous groups; and the lifestyle blog “Grown Woman Chronicles” – targeting subjects important to women over 40. She is continuing to build her empire and is working on the launch of Daisy Real Estate Development in 2020. These businesses are continuations of her role with Rock Ventures where she oversaw the development and implementation of all the philanthropic and community support for the company in Detroit, Cleveland, Charlotte and Scottsdale, AZ. Her responsibilities included all corporate charitable giving, management of all charitable relationships, identifying volunteer opportunities for the family of company team members and ensuring that the company’s award-winning community presence was clearly defined and metrically impactful.

Prior to Rock Ventures, she served as the Director for the United Negro College Fund, where she was responsible for the Michigan market, leading a multi-million-dollar, state-wide fund development campaign for the nation’s oldest and most successful minority educational assistance organizations.

A seasoned nonprofit, community development executive with a background in corporate philanthropy, radio media sales, Andrews is passionate about the role corporations and private entities can play in the lives of citizens. She continues to mentor numerous nonprofit leaders, college and high school students, and young women entering the workforce.
The most important aspect of her career is her commitment to an impactful community presence which includes several prominent appointed roles such as co-chair of the community outreach subcommittee of the Detroit Public Schools Transition Committee under the leadership of Transition Manager Judge Stephen Rhodes; and serving as co-chair of the Community Advisory Board of Detroit Police Chief James A. Craig from 2014-2016. She is also an appointee of former Mayor Dave Bing on the city of Detroit Human Right Commission in 2011.
Andrews has amassed many years of active board service with many groups including the following organizations (year joined): Detroit Receiving and Harper/Hutzel Hospital Board of Trustees (2013); Arise Detroit (Vice Chair, 2011); the Vanguard Economic Development Corporation (2011 – Board Chair – 2015); Minority Organ and Tissue Transplant Education Program (MOTTEP – 2014); Wayne State University President’s Community Advisory Board (Detroit; 2012). Other civic memberships include the Links Inc. – Great Lakes chapter, Alpha Kappa Alpha Sorority Inc., Gamma Phi Delta Sorority, Inc.
Andrews holds a Bachelor of Arts degree from Spelman College in Atlanta Georgia, and a Master of Business Administration from Northcentral University (AZ). She was named a 2010 Woman of Excellence by the Michigan Chronicle; and is a graduate of Leadership AFP (2008), Leadership Detroit (2011), and Leadership America (2016).