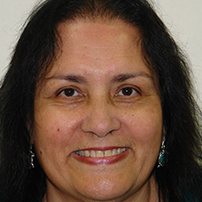 Lenore Dembski, Paperbark Woman is Aboriginal and was born in Darwin 64 years ago. Lenore’s Father was from the Iwatja language group and her Mother is Kungarakan. Kungarakan people’s traditional country covers Adelaide River, Batchelor, Darwin River and Litchfield Park and they include the Finniss River Land Trust and parts of the Wagait Land Trust.
Lenore was the Director Aboriginal Development Unit in the Northern Territory Government from 1990 until 1997, where she was involved with Aboriginal employment, training, economic and community development programs. Lenore has been designing and making clothes for over 50 years and has been running Paperbark Woman since 1997 designing, manufacturing and retailing conference bags, clothing and textiles, assisting with project management activities, mentoring Aboriginal people wanting to get into small business and events management.